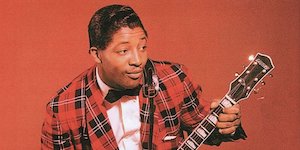 Bo Diddley was an American music icon that inspired the likes of the Beatles and the Rolling Stones. While Bo’s original sound left an indelible mark on contemporary music, he struggled to find mainstream recognition for his contributions during his lifetime, sometimes feeling victimized by the 1950’s record companies that embraced his style but repackaged it for white audiences. Rolling Stone has written about Bo being copied by the King himself, and the Smithsonian proclaims that “Bo Diddley’s beat changed the course of rock music.”

His pioneering sound led Bo to become the first black artist featured on the Ed Sullivan Show in 1955, where he defied executives and played an original song instead of the cover song they had slated for him.

Bo was never invited back to the Ed Sullivan show but continued to rule the stage until suffering a stroke in 2007. Bo passed away in 2008 at the age of 79 leaving a big family and even bigger legacy. While not always recognized as an originator of rock music, his heavy influence on the genre is undeniable. What Bo may lack in name recognition he more than made up for in boldness and originality.

Unfortunately for Bo’s many children and grandchildren, his amazing legacy has been soured by alleged mishandling and misappropriation Bo’s of estate and intellectual property since his 2008 death. The family alleges that Bo (known to the government as Ellas McDaniel) was manipulated to execute an estate plan that would unconscionably benefit the managers that handled Bo’s business affairs.

Bo Diddley’s 2006 will, which the family claims he lacked the capacity to execute, granted his talent agents a 30% cut of all revenue ever produced from his intellectual property after his passing. This lifetime royalty share was not contingent upon further work promoting intellectual property or limited to royalties that Bo’s managers helped bring in. The attorney who wrote the will was empowered as trustee over Bo’s intellectual property and given the lifetime power to choose all future successor trustees.

In 2018, ten years after Bo’s death, eighteen members of Bo’s family retained our law firm to seek the removal of the trustee controlling Bo Diddley’s song rights and the managers that were enjoying the music royalties. My first meeting with the family was overwhelming. There were many voices and most of them were very angry.

The trustee empowered by Bo’s controversial will had managed the trust for years without accountings or records. The family was in the dark regarding their patriarch’s estate and felt powerless, employing multiple law firms but getting nowhere. The original trustee quit before ever accounting for trust assets and hand-picked a successor who eventually issued accountings to the family. In 2016, the family received their first accounting and was dumbstruck by the professional service fees that consumed music royalties that they felt entitled to. As we sat around a large conference table pouring over documents all I could ask myself was; “how did this happen?”

An Ounce of Prevention

The answer to that question was that Bo did not get good advice during his lifetime and his family did not get good advice in the wake of his death. We were talking about a multi-million dollar estate of a well known celebrity, and there was no part of the estate plan, estate administration, or trust administration that had been performed ethically and competently. The family was adamant that Bo did not know what he signed when he executed his 2006 will and never intended to put his managers and their lawyer in such a powerful and profitable position. However, that ship had sailed years ago when the estate went through probate, and we were now looking at an uphill battle of protracted trust litigation to regain control of Bo’s assets for his family.

The lesson that I took from this is that the addage “an ounce of prevention is worth a pound of cure” is an understatement. If Bo or his family would have consulted with an objective expert about his estate plan prior to his death, this entire mess could have been avoided. Similar to cancer caught early during a screening, the influence of Bo’s management team on his estate plan could have been nipped in the bud by simply executing a new will and trust that did not revolve around their interests. If he was indeed incapacitated in 2006 an incapacity guardianship proceeding could have determined that and empowered a family member or neutral third party to protect his interests. There were many crossroads where good advice could have made a big difference, but with each year that had passed the problem had become more intractable.

The subsequent waste and arising litigation has cost the trust millions of dollars between legal fees and lost promotional opportunities, and resulted in untold heartache and frustration for Bo’s heirs. While the story ultimately has a happy ending (see part 2), 10 years of costly legal struggles arose from a failure to seek qualified, unbiased advice on an important decision. Our firm takes this lesson to heart when advising our clients regarding their cases.

When handling probate, guardianship, or estate planning matters for our clients we ensure that things are done the right way. Law firms all over the state trust Florida Probate Law Group to handle high stakes estate administration related to litigated wrongful death claims. Our experience working on complex probate matters allows us to avoid common pitfalls and get predictable results. We prevent mistakes that could jeopardize case outcomes by ensuring that settlements are compliant with the probate code and efficiently securing the court orders that litigators need. In representing consumer clients we bring the same diligence and thoroughness to bear in achieving their goals.

If you have questions about your probate, guardianship, or estate planning matter, learn from Bo’s mistake and get an objective opinion to prevent problems down the road. We are always here to help. Call anytime at (352) 354-2654.